Foraminal stenosis—often informally referred to as foraminal narrowing—is a condition that arises when the spaces between the vertebrae shrink. Under normal condition, these spaces are large enough to become canals through which nerve roots can easily pass. When the space becomes too narrow, the symptoms of foraminal stenosis start to manifest: 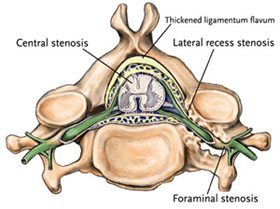 The causes of this condition are varied, ranging from bone spurs and herniated discs to congenital genetic defects that cause some people to be born with foraminal narrowing.

Upon diagnosis of foraminal stenosis, the most common initial treatment will be directed toward controlling the swelling of tissue through NSAIDS (non-steroidal anti-inflammatory drugs) followed by a recommendation of physical therapy.

Therapy can usually begin at home with a series of exercises targeting the affected area of your spine. Stretching usually responds well enough to offer alleviation of mild pain related to foraminal narrowing when done in conjunction with anti-inflammatory medication and the application of heat or ice therapy as necessary.

Your physician can inform you as to whether your particular case would respond better to heat therapy or cold therapy. These treatments are a baseline of defense and can only reduce rather than eliminate symptoms.

The same caveat applies to the popular forms of alternative treatments. Yoga help strengthen the back to alleviate pain, but if done incorrectly can potentially do more harm than good.

Acupuncture, acupressure, anti-inflammatory herbal supplements and even chiropractic manipulation may all possibly assist in offering minor and temporary relief, but when no improvement of symptoms have manifested after a suitable period of time the next step to consider should definitely include surgical options.

This decision should always be include consultation with a physician and only after non-surgical treatments have been tried long enough to determine their effectiveness for offering adequate relief of symptoms.

Cervical foraminotomy is a minimally invasive procedure for treating foraminal stenosis which involves removing a tiny piece of bone or tissue from the cervical spine that causing the compression of the nerve. When the cause of nerve compression is removed, the fissure that the nerve needs to travel through between the vertebrae is enlarged, thus reducing symptoms associated with a pinched nerve.

Cervical foraminotomy is considered minimally invasive surgery because it requires an incision of less than one-inch through the back of the neck. A tube is inserted through this incision for the removal of a small portion of the vertebra called the lamina. Highly specialized medical equipment is then used to access the compressed area for the removal of the bone or tissue.

In some cases, spinal conditions cause the lamina to compress the nerves, resulting in the very common symptom described as a shooting pain through the extremities. Narrowing of the spinal canal—known as spinal stenosis—is the usual cause of this pain, but this minimally invasive procedure can also treat foraminal stenosis. This procedure is similar to cervical foraminotomy except that the equipment is used to specifically remove the portion of the lamina causing the pain. 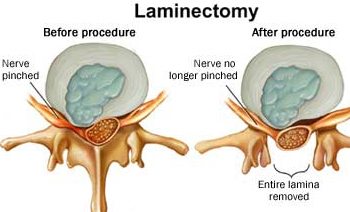 A microdiscectomy is a non-invasive treatment that can be performed as an outpatient procedure. In many cases, patient can expected to be treated and discharged within hours, although it is certainly possible an overnight hospital stay could be required under certain conditions.

A microdiscectomy requires a small incision allowing for the removal of any matter stemming from the disc which is pressing upon the spinal cord or nerve root.

This non-invasive treatment for foraminal stenosis begins with an incision for the purpose of decompressing the affected area. This is accomplished by extraction of that part of the spine pressing against the nerve.

Following the decompression procedure, a device called an interlaminar spacer is inserted that serves to stabilize the spine, thus reducing or eliminating the pressure which is causing the pain. This stabilizing device allows for maintenance of the decompressed area without placing any limitations upon the range of motion.

This technique involves inserting dilating tubes through the incision that stretch the muscle to help avoid the tearing that would otherwise be necessary to access an impacted disc. Once accessed, the disc and any proximate bone spurs are removed. The open space is then filled with a synthetic spacer to attain a more normal alignment of the spine.

Traditional surgery to treat nerve pain has meant much larger incisions that require tears in the muscle. In addition, those surgeries also mandated hospital stays of and slow recovery periods marked by pain. Minimally invasive surgical procedures to treat foraminal stenosis not only eliminate these requirements, but because the incisions are smaller, the risk of complications and infection is also reduced.

Skip back to main navigation

Stop Living in Pain – Let us help you