Cherie Smith went to college and pursued a degree that would enable her to begin a career as an Administrative Assistant. As Cherie’s career progressed, she found much contentment helping people, keeping the office organized, and serving people in many ways. Also, her role allowed for a work/life balance that she had always wanted. Her chosen career was more sedentary than active. Many hours were spent sitting, working at a computer, and moving about the office. Outside of the occasional exercise class at the local gym, her physical activity was limited. Most of her calories were burned performing mom-like duties. Shuttling kids to various activities and keeping the household in a functioning and working order. 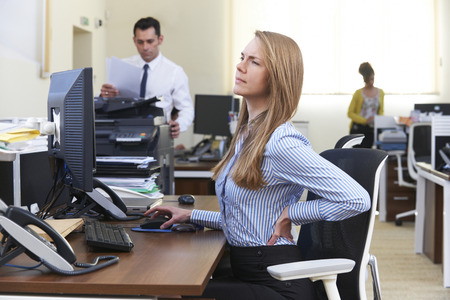 After about 15 years–all with the same employer–Cherie was putting away files in the cabinet adjacent to her desk. A task she has done countless times over the years. Upon bending down to open the bottom drawer, it happened! At first, she wasn’t quite sure but knew it wasn’t good. A sharp pain pierced her lower back. She fell to her knees–a position that brought some comfort and allowed the sharp pain to subside. She took a moment to regain her composure, put the files away and close the drawer, then gingerly came to her feet.

During the weeks that followed, the pain continued with occasional tingling and numbness in her back. Although there was discomfort in her daily routine, it wasn’t severe enough to take time-off from her busy schedule to see a doctor. So, she addressed the discomfort with over-the-counter pain medication and made a concerted effort to apply a warm heat pad and cold ice packs to her back every night after the kids were in bed.

Months went by and the pain continued. Cherie reached a point where she knew that this was a much larger issue. Her self-diagnosed lower back pain was not going away after a few weeks of just taking it easy and slowing down. So, she sought the advice of a doctor who diagnosed her with a lower lumbar disc herniation. Following this consultation, she knew that action needed to be taken.

As she contemplated her options, she continued to ride the wave of temporary relief after each physical therapy and chiropractic appointment. She was in the middle of life; raising pre-teens; had a secure job; and good family life. Outside of the birth of her children, this was the biggest medical hurdle she has faced. She wasn’t a big fan of surgery, but she really wanted normalcy back of living her day-to-day life pain-free and not having to worry about the randomness of sharp pains shooting through her body at the most inconvenient times.

After additional research, she decided that minimally invasive spine surgery was the best option. Luckily for Cherie, the Minnesota Spine Institute provides extraordinary back and neck surgery solutions. She was able to set-up a MRI consultation with Dr. Dan Hanson and received first-class treatment. Dr. Hanson performed an endoscopic discectomy and within a few days, it was back to life as normal. The pain, heat pads, and ice packs were gone. There were no more physical therapy or chiropractor visits. She had returned to a life without discomfort and had full confidence every time she had to retrieve a file from that bottom drawer.

Skip back to main navigation

Stop Living in Pain – Let us help you